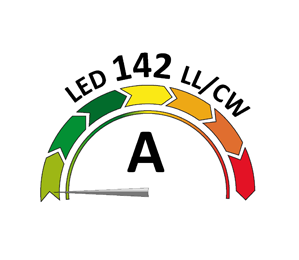 Over 142 luminaire lumens per circuit watt!

Our latest LED luminaires have been independently tested at Light Laboratories and have achieved over 142 luminaire lumens per watt.

This winning combination of world class LEDs, high light transmission diffusers and optical reflectors have resulted in a luminaire with exceptional performance.

The first of its kind, the 142.6 LL/CW performance is truly exceptional and efficiencies have increased to unprecedented levels. When compared to traditional fluorescent lamps types they can substantially reduce energy consumption and have a capital expenditure payback of less than 12 months!