The Corridor Presence Detector is a compact unit that provides energy-saving functions for corridors, aisles, hallways and similar areas in a DALI system. It has detection on three beams, covering a 100° sector with a 41m radius.

Its PIR sensor enables it to switch on the lights when the coverage area is occupied, and either switch them off or dim them to a preset level when it is unoccupied.

The unit has two detection modes, suited to different types of movements:

The PD341 presence detector is compatible with R1000 control system and configuration software, Designer and Toolbox. Once connected to a lighting control system, the software automatically detects the unit which can be programmed with the required functions.

The sensitivity, the detection mode and the LED indication are set from the sensor’s circuit board. 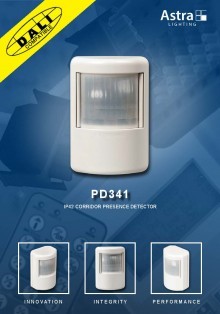